it is quite a difficult task to try and define korter í flog‘s style of music. drawing influence from kraut-rock, post-punk, doom metal, no wave and more, they usually work with simple, repetitive patterns in their songs, which results in a structured but chaotic outcome. 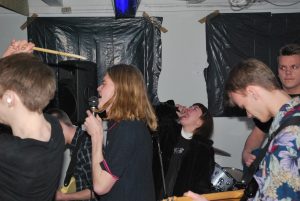 during live shows, they place a big siginifigance on the audience‘s participation – they strive not to be placed above the listeners in any way. also implementing an open source stage policy, everyone attending can join them on stage; all mistakes and clumsiness are received with open arms. korter í flog never charge an entry fee – their music should be free, and enjoyed by anyone interested.

they´ve released one full-length album, „lög til að slá við vol. 1“ at this point, as well as an instrumental visual album (flog í korter), directed and edited by vocalist vilhjálmur yngvi (susan_creamcheese). their second album is currently being worked on and should come out later this winter.