In the beginning of January 2017, a few friends decided to get together in the social center of Brún in Borgarfjörður, in the south-west of Iceland, to play music for each other. The event was small and beautiful, and the guests mostly consisted of Reykjavík-based alternative musicians. The line-up included sets by asdfhg., Lucy in Blue, Umer Consumer, Krakk & Spaghettí, Aragrúi, and the first ever bagdad brothers performance.This happened before the existence of post-dreifing, and the financial part was mostly handled by one person – leaving them in sizeable debt for the following months. So even though this was a nice starting point, a sort of proto-HÁTÍÐNI, there was obviously a lot to learn from.

Once post-dreifing had come to be, the idea came up to try to do a similar thing again, but maybe inviting a few more people this time, and having everyone involved help out in making the event make sense financially.

HÁTÍÐNI finally took place over the first weekend of July 2018, in the same spot as the previous event. Having spent an uncountable amount of hours organizing the event collectively, things went way smoother this time around. We had around 150 guests over the weekend, including artists and volunteers, some coming for just one day, others staying for the whole festival.

No one ended up in debt this time around, which was very pleasant. Ask someone who went, they’ll tell you it was beautiful. This is why we’re doing it again. 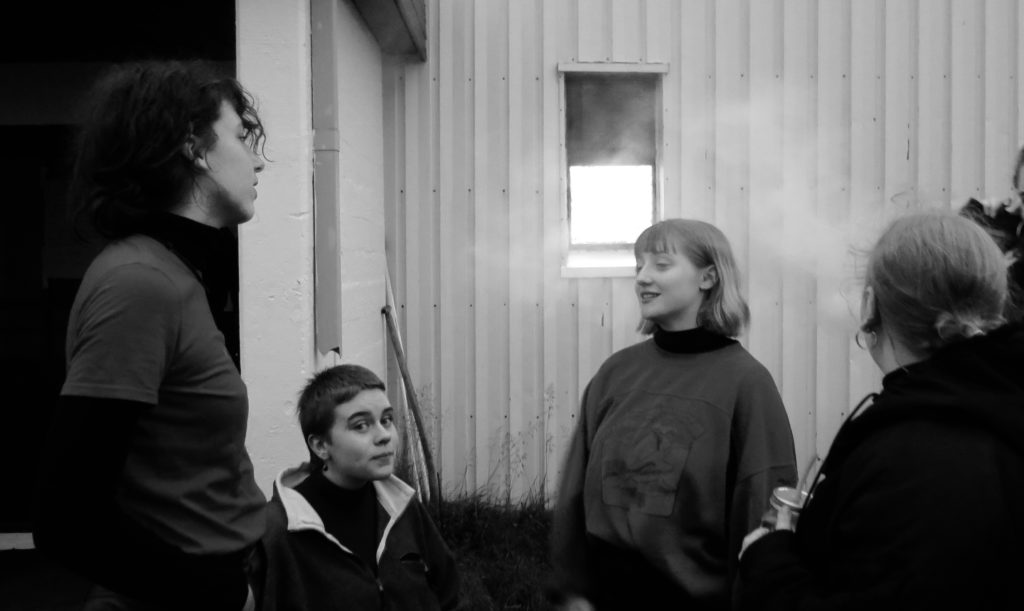 In 2019 the festival took place in the old elementary school of Borðeyri in Hrútafjörður – a different venue than the previous year. The house was built with voluntary work from locals in the late nineties, and the idea was to have it a multi-functional space since there aren’t many children who live in the area. And now it has also served as a concert venue, a social center, and as a sleeping facility for artists and organizers during HÁTÍÐNI.

Last year´s line-up consisted of over thirty bands and musical artists, as well as offering a lively schedule of non-musical events in the town´s abandoned slaughterhouse. The bands were as diverse as they were many, and we were lucky enough to host a total of four international acts; Norway-based Fucales and Melasól, The Beeves from Colorado in the US, and Australia´s Rebel Yell. And of course some of Reykjavík´s favorite DIY-bands, including GRÓA, K.óla, Korter í flog, sideproject, Tucker Carlson´s Jonestown Massacre, and more. The festival would not have been possible to realize on this scale without the help of countless volunteers and festival attendees – we are immensely grateful for all the help we received.

Watch a short video-documentary from HÁTÍÐNI 2019 by Finnur Kaldi: